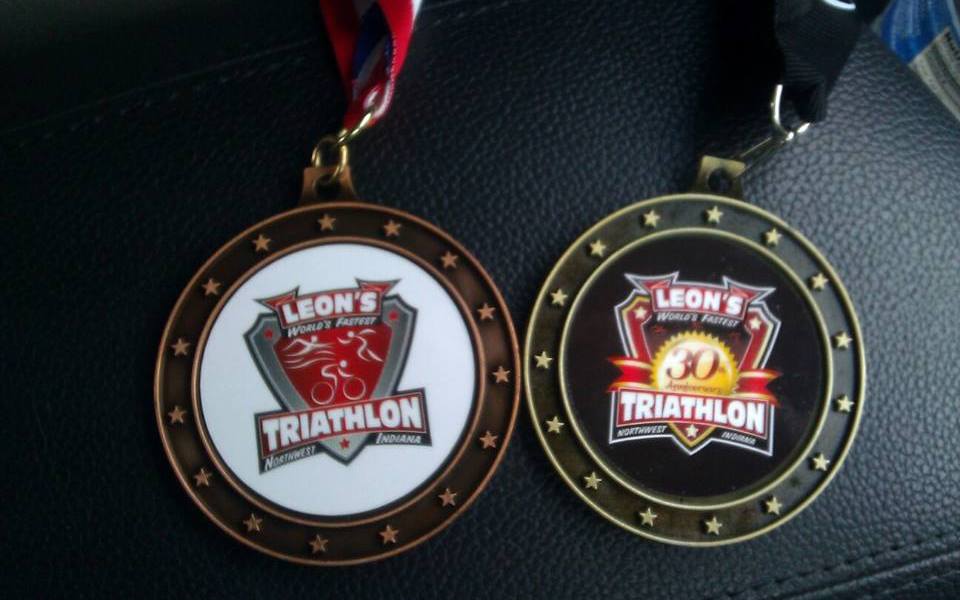 Third Place and my Finisher’s Medal!

I took part in the Leon’s Fastest Triathlon on June 2, 2013. Despite my complete lack of preparation for the race, I still placed on the podium. I got third place for my age group — amazing!

Days prior to the race I was even considering not racing as I was not feeling well (was it pre-race jitters? Or something else?). The last race I had I got some sort of stomach bug and it really messed things up, and I was feeling very similar a few days prior, and so I was nervous.

Anyway, SF convinced me to go anyway and just “do it to have fun”, and so I did. We woke up at around 4:30am so that we could arrive at the transition area before it closed. Thankfully we had plenty of time.

The sun was shining and it was cool but not cold. It seemed alright. But then, within transition closing and the start of the first few waves, some dark and heavy clouds began rolling in, and right behind them was a crisp and COLD wind. By the time my wave started (the very last wave — 30 minutes after the elite waves went), everyone was shivering.

The jump into the metal tasting lake was welcomed by many due to its relative warmth compared to the air. For me, the lake was kind of gross — it smelled bad and had a funny taste to it. It was also pretty murky. Nonetheless, we all jumped in and waited for the start. I got to start with SF as they grouped all females and males who were 39 and under all together.

Sitting in the water, I can honestly say I just wanted to get out. Once the wave officially started, I was feeling very cold and my muscles just did not want to work. However, I just persisted and swam. It wasn’t my best swim — I just went — neither fast neither slow. I ended up with a 27 minutes swim. Not my best work, but considering the circumstances it was alright.

I was still frozen as a made my way through transition. I saw SF there — we had finished with approximately the same swim. We exchanged words about how cold it was and sort of “took our time”. I think the first transition was around 2 minutes for me as I couldn’t get my wetsuit off. SF and I started the bike leg at the same time.

The bike was FREEZING. I was soaking wet and now I had to go out for over an hour in 50 degree weather — wearing shorts! SF was about 2 minutes ahead of me the entire time, and I wanted to make sure I kept up with him. I was faithfully putting out 200 watts the entire time, yet because I neglected to utilize the aero-position, my average speed was only 20 mph. Additionally, I was convinced that my third chain-ring was broken because I could not shift into it — later it turns out my hands were just too frozen to apply enough force to switch it!

For the entire bike I was just counting down the miles. I was cold, and sniffling the entire time. Also, it started to misty-rain and it obstructed my view. I hate riding in wet conditions. I am always afraid I’ll crash!

Thankfully, I did not crash. I made it to transition — frozen — and thankful that the last leg of the race was here. I threw on my running shoes and like a robot, started the run. For the first half a mile, I could not feel my toes. They were numb. Eventually, the feeling *did* come back but I was just done. I started my run a little too fast, at around 7:15 a mile; I wanted a 7:30 pace for the race. Starting out too fast was to my detriment because I eventually slowed to a 7:50 pace. I was just cold and tired and still oh-so-done.

The run course is an out and back. I didn’t think that I’d place *at all* considering my lack of preparation, but on the way back when I stopped seeing girls in my age-group, I started to think “hey, I might actually have a chance!” For the last two miles I was just day dreaming about actually being on the podium and being in disbelief about it. I remember telling myself “you haven’t made it yet, so focus on the task at hand”, and I just kept running. I wanted a 2:30 overall time, but I had missed my run goal due to my 7:50 pace, and was actually on tract for just under 2:40. I didn’t think I’d get a good placement.

Then at the last 100 yards, a girl who looked about my age ZOOMED past me. She crossed the line 2 seconds before me. 2 seconds! Once I saw her overtake me I did put in the sprint rockets, but she just snuck up on me! I thought for sure that she had taken any chance of a podium placement from me and I was a bit disappointed. I later found out that she was in a different age-group than me (yay!) so I actually did place!

But, thankfully she did sprint ahead of me, which subsequently forced me to sprint as well, because the 4th place age grouper was only 10 seconds behind me. If it hadn’t been for our sprinter superstar, I’m sure this other girl would have overtaken me. I was super lucky.

In the end, I grabbed a water and waited for SF. He was only 5 minutes behind me. Then we got some food and found our clothes. Someone went into cardiac arrest just seconds after they crossed the finish line. It was crazy. I had never seen anything like that! I think they were OK, but the person was literally dead for at least a minute. It was quite an adventure.

I was awesome to win the medal overall. I am still in disbelief. So far I have two podium finishes, which is awesome.

This race also qualified me for the Triathlon National Championships, and I will do them in 2014. Then, if I can get a respectable time, I can be a part of Team USA, which is pretty damn cool. We’ll see though — its still a LOOOONG way ahead.

Overall, I was pleasantly surprised.